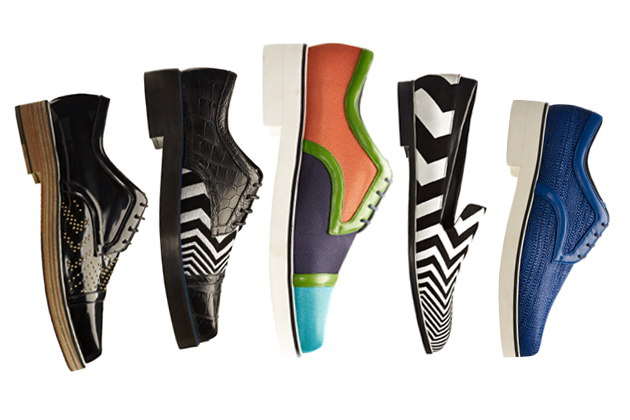 Following the successful launch of the first men’s collection in January 2013, Nicholas Kirkwood is adding more styles in his offering of men’s footwear for next summer. Note the introduction of a thick lightweight rubber sole applied to brogues, while boots and loafers explore the idea of functionality and proportion within classic men’s footwear. Taken from the form given to sneakers in the 70’s the sole is seen across both dress and casual styles including the new loafer. Color-blocking and the use of contrast custom leathers and fabrics, raffia teamed with leather and a high-tech sports mesh mixed back with metallics in cooper, teal and wine showcase Kirkwood’s considered attention to line, and intricate detailing, while a textured calf in tan, black and platinum gives way to softer structures. The collection showed at London Collections: Men with an installation, designed by Mehrnoosh Khadivi from Craftwork Studio. Presented in an all-black environment of large monoliths and individual plinths, the space was in keeping with the aesthetic of the Kirkwood retail stores; clean lines with negative space in between objects.