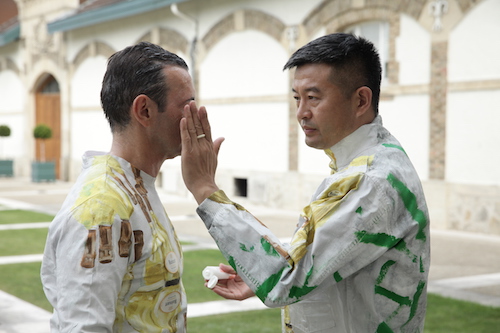 Known as The Invisible Man, Chinese artist Liu Bolin is collaborating with France’s oldest champagne house Ruinart at this year’s Frieze New York. This moniker came about when his office was demolished and he created the almost perfectly seamless blending-in of himself into photo as a protest. He wanted to demonstrate the coexisting relationship between construction and humanity — a concept that also appealed to the champagne magnate. In his final eight pieces with Ruinart, Bolin elegantly illustrates the meticulous process of champagne-making by masking himself and the workers of the house into the landscape of the everyday champagne production. We sat down with the artist at Frieze to find out more about the collaboration.

Angelika Pokovba: How did you go about choosing Ruinart to collaborate with?

Liu Bolin: (per translator) For me it was important to know about the company. When I had communication exchanges with the team I felt their passion about their work, their company’s culture, and I focused on reflecting this aspect in the artwork.

AP: Did the idea to incorporate yourself into the “landscape” come naturally, or did you set out looking for backdrops to blend into?

LB: Before I came into it I didn’t actually have something in mind. It was not very clear. After I walked around the premises and I learned about the entire production process from the beginning to the end including production, storage, filtering, etc., I found it to be a beautiful process and I wanted to record this beauty.

(Each of the shots demonstrates a different part of the champagne making process. )

AP: Would you elaborate of how you actually made these pieces and how many people were involved?

LB: The first photo is at the winery and I invited Frederique, who is the production/technology expert. He is someone that would have a record of when the grapes were first collected and then the weather, the temperature, all of these things… He is someone who has the control from the first steps. So he is the first photo. That first photo is related to the source of production and I also included him in others so that he is involved in the entire process from the beginning until the end.

AP: What do you believe you accomplished with these pieces?

LB: That touches on the core of my artwork. I think that all artists do these things and have a discovery of certain issues and questions. Through the collaboration with Ruinart, I feel that I have deepened my understanding of the winery culture and of European culture. From my collaboration and communication with these people who are very clearly passionate about wine and the heritage of this company, that has really touched me and made me more deeply appreciate the European craftsmanship– what kind of effort their are willing to go through to create such a brand and such a heritage. This is something that also helped me and gave me nutrients for my work.

As an artist I like to keep challenging myself in my work. Regrettably the public has acknowledged and liked the photos so far, but not the other things I have done. I think I will put more effort for my other forms of art to be liked as well.

Find Liu Bolin’s pieces at the Ruinart Champagne Lounge at Frieze until May 6th.