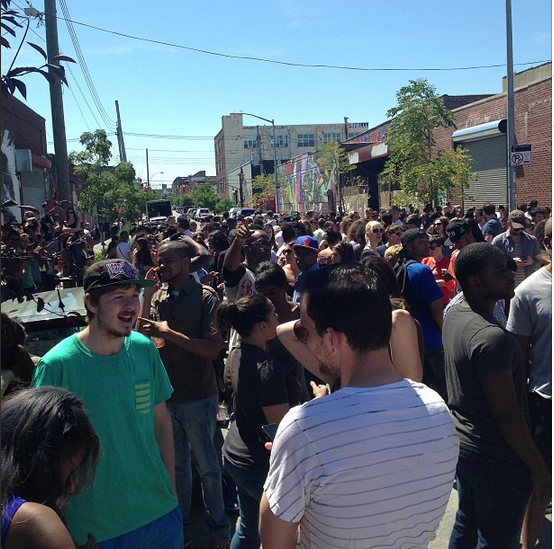 When Revolt TV tells you that Jay-z, Beyon… Wait. What is Revolt TV? Right. (Revolt TV is “a new music network Sean Combs dedicated to the creators of this of this generation”). Make of that what you will.

When Revolt TV tells you that Jay-Z, Beyonce, and Justin Timberlake will be playing a secret Brooklyn show at 421 Troutman Street… nothing happens at all. Well, nothing by way of a secret show, something by way of a lot of pissed off fans standing around in clueless desperation on an otherwise perfect Saturday afternoon. Revolt TV sent the ambiguous tweet out to their 30,000+ followers on Saturday morning, quickly getting picked up by a number of media outlets (quietly deferring any mislead to  Revolt TV).

The crowd’s swelled as… nothing… happened… at all…

Unfortunately, what sounded too good to be true, was indeed, when at 2:21PM Revolt TV retracted their earlier statement about the show and issued an apology to all those waiting. And with it, the silent crash of a million shards of credibility.

One Twitter user (@MayorOfBushwick) summed it all up succinctly: