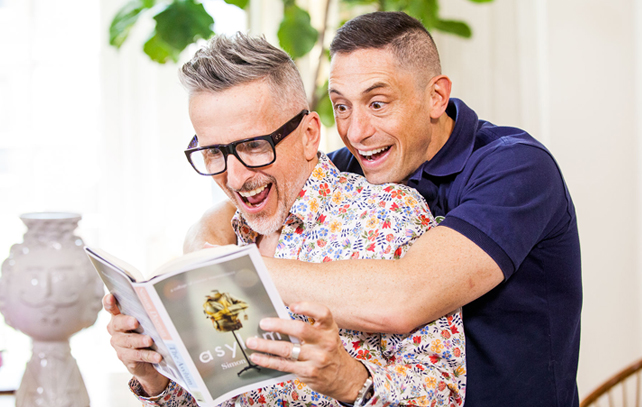 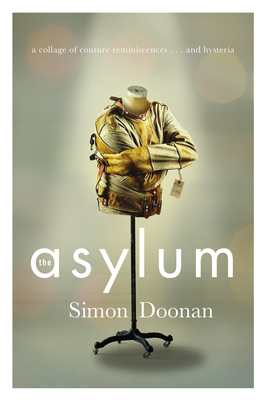 Simon Doonan, appropriately described as a writer, bon-vivant, window dresser, and fashion commentator, has nearly thirty-five years of work tucked (neatly) under his belt. And now, keeping the résumé long and luxurious, he’s adding a sixth book to his collection, his brand new: The Asylum: A collage of couture reminiscenes… and hysteria (out tomorrow, 9/4). We caught up with Doonan and lauded questions at him, which he cheekily volleyed.

Essential Homme: I have to start by asking about your dog Liberace. How’s the little guy doing?

Simon Doonan: He’s actually doing great. He’s very old and doesn’t do much, but he seems quite happy. And he’s still eating and pooping, which is the main thing. 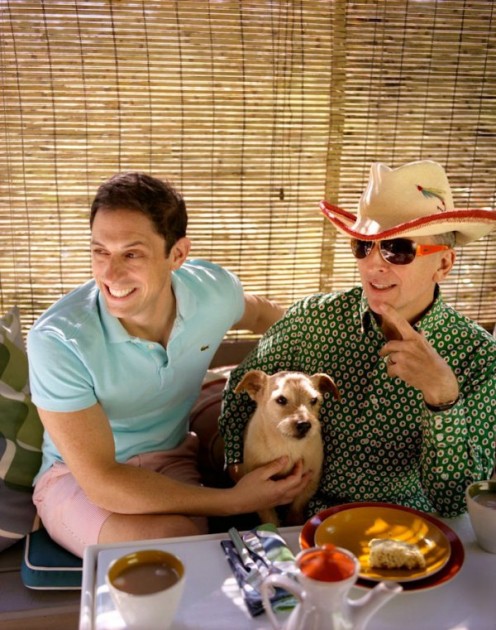 EH: Absolutely. So what did you do all Summer?

SD: I prepared for putting out another book. I started writing when I was 46, so I would never have imagined that I’d have pooped out six books by now. I’m still taken by surprise how I’ve been able to establish myself in a completely different field. Also, my role at Barneys as Creative Ambassador keeps me really busy. It’s fantastic because I get to see all the new product, the new designers that are coming along. And Barneys has undergone this fantastic reinvention, reimagining in the last three years under CEO Mark Lee. He’s refreshed the company and made it dynamic which is so important, especially in retail where you have to reinvent every few years.

EH: You’re often regarded as one of the sharpest humorists, I’m wondering who makes you laugh? And who’s someone, perhaps not on our radar, that will make us laugh?

SD: I always enjoy… So many people… I’ve always enjoyed really insane humor, like Monty Python, John Cleese, all those guys. The beginning of that sort-of Dada, surreal, insane humor. That really makes me laugh. It’s a genre that isn’t really around anymore because everything today is very much ratings driven, something like that probably wouldn’t get off the ground cause it’s too bananas.

EH: You’ve been a fixture on the small screen throughout the years. What’s been your favorite of your television appearances?

SD: I’ve done a million VH1 shows and those are always fun cause you just get to sit there and spit out one-liners. It was really fun doing Gossip Girl. I got to share a trailer with Leighton Meester, who has a wicked sense of humor. I loved doing the early America’s Next Top Model’s because that was sort-of the beginning of that whole genre. Tyra Banks is really a revolutionary. She started that crazy competition genre and brought it into the world of style. She’s a very philanthropic person who really is giving back — it sounds like a cliche — she’s a mensch as they say in the Yiddish vocabulary.

EH: Brief aside, have you been watching the new season at all with the male models?

SD: Well, the big secret about male models is that they’re five times more crazy than women. Modeling and being objectified is something that’s sort-of part of the female psyche, but for men, it requires so much adjustment that I think it really makes men completely nuts.

EH: What do you think of selfies?

SD: I don’t have a problem with it. I’m slightly mystified by people’s mania for documenting everything. The other day, I was walking along the beach here in Shelter Island and the sunset was really amazing and I start to look around and everyone else is looking at it, too, but they’re looking at it through their phones. Andy Warhol would be delighted by it because he was very into that. I understand it’s part of the contemporary psyche, but I just don’t have that impulse. We’ll have events at Barneys and I’m supposed to be tweeting and tumbling, and it’s always so hard for me to remember. Call me old fashioned, but I’m in the moment. They come up to me on the streets and say, ‘Can I get a picture with you?’ instead of saying ‘Hello, how are you?’ and it’s a new way for people to connect with one another. Which isn’t a bad thing. I’m determined not to become one of those grumpy old people that just kvetches about everything all of the time. I don’t have a problem with it. I try to not be disdainful or opinionated, I’m simply asking questions.

EH: I read that disdain is one of your least favorite qualities in a person.

SD: It’s true. It’s also something people are looking for. People will often ask me questions that are a gateway to me being disdainful about something. Like, ‘What do you think of muffin tops… or Ed Hardy?’ They’re waiting for me to be disdainful. And I’m always like, ‘I love it!’ People flaunting themselves and wearing colorful clothes, there’s no downside to that. Fashion is subjective. If you like Ed Hardy, you’re probably not going to like Céline. 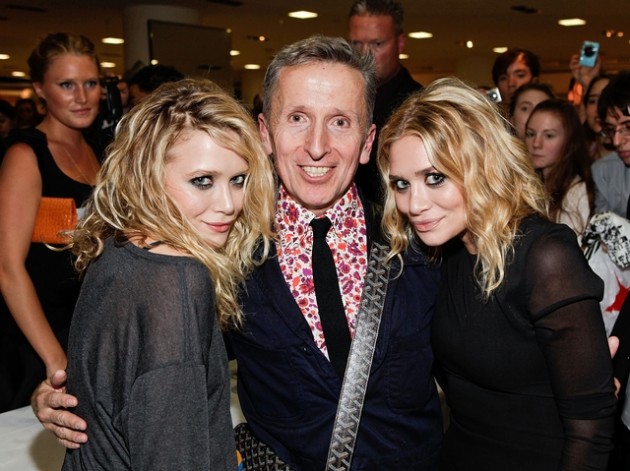 EH: At what point did you start to recognize that people were looking to you as an authority on style?

SD: It’s hard to learn fashion now because fashion is essentially this avalanche of stuff that comes at you now, almost continually. And I’m not sure how much there is to learn from it, because a lot of it isn’t tied into the culture anymore. When punk arrived, it was tied in so much to what was going on in England at the time, you know with all the recession and the anger and Thatcher. When hippy and counter-culture came along it was a reaction to the 1950’s and the very structured oppressive culture of America that was very formalized. The back-then trends like glam rock were a reaction to hippie, it was more synthetic and plastic-y and twinkly and a parody of show-business whereas now we don’t get big trends like that coming along. We just have this massive amounts of product coming towards us as consumers. The thing to learn is just get your own look, doesn’t matter what it is, and develop an idiosyncratic personal style. You’re not really going to get information or pointers from the external world, you’re just going to get an avalanche of stuff.

EH: Is there someone you would point to right now as exemplifying the start, perhaps, of a turning point in all of this?

SD: No. Not really. There’s some girls that are more unconventional than others, obviously someone like Tilda Swinton. She’s not dressing for the people, she’s dressing for herself. She’s special. And different. Most actresses, especially if they become well known, become such a target for the online media and the online critics that they get scared. I would say performers are usually a lot more courageous.

SD: Like Miley Cyrus is clearly a nut, but she actually looks kinda great. It was a fun little outfit — when she did her thing at the VMA’s — because it had this one piece swimsuit with an applique on the front and then she yanked it off and there was a flesh-colored rubber almost 1940’s looking swimsuit on underneath. It was kind of a cool, edgy, interesting kind-of outfit, but you had to look at it very objectively because she was doing that super-hoochy routine. But performers like her and Pink and Madonna and Gaga they’re more interesting than actresses.

EH: Do you ever feel that same criticism coming down on you and having any influence on what you produce?

SD: I used to be very relaxed about press, but with the internet media, you start to feel like they’re ransacking everything you do to look for inflammatory stuff that they can take out of context. I’m a J-list celebrity, so I’m not written about very much. I’m pretty low down the totem pole and have no delusions about that. With these young kids, like Justin Bieber and Miley Cyrus, it must be tremendously disorienting, having this flow of adoration coming at you via social media, which is sort of paralleled by the flow of incredibly hostile stuff. I don’t get that kind of treatment. Once in a while something I say gets taken out of context and it bothers me for a day or two, but I understand that’s the nature of it.

EH: What kind of music do you like to listen to?

SD: I’m really eclectic. Fortunately, Jonathan [Adler, my partner] is all about what’s number one. I’m completely versed in every single contemporary pop tune. Carly Rae Jepsen. He has this work-out iPod which he plugs in our house so I’m very familiar with all that stuff. Left to my own devices, however, I love classical music, particularly early 20th century, late 19th century classical music. I also love 50’s music, like The Everly Brothers and Elvis. But the 60’s is probably my most favorite, like The Kinks, The Animals, The Small Faces, those were the records I was buying. Then Bowie. From glam rock to pop to classical. Anything that was rule-breaking at the time. 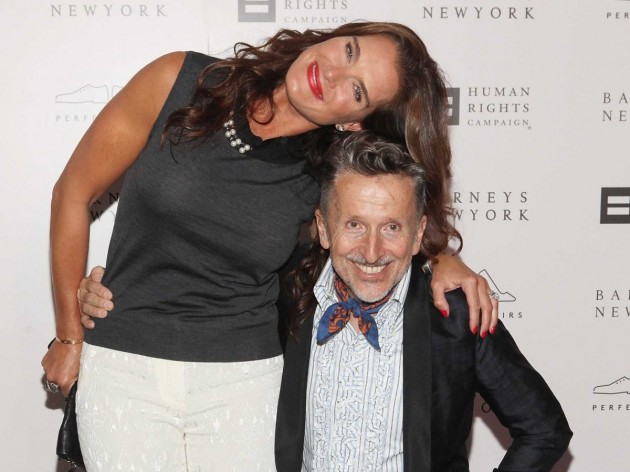 EH: Do you eat fast food?

SD: Never. I’ve actually never eaten fast food. I’ve never been into a McDonald’s. I just couldn’t because… I’m too old. I never ate it as a child. Food was food when I was a kid. Then counter-culture came along and I was eating lentils and brown rice. And I never really moved out of that idea that food should be healthy. When fast food started coming along in the 60’s with burger joints, I remember saying to my dad, ‘Why can’t we eat hot dogs?’ And he said, ‘Because they’re made of doggie dick.’ So when I see people eating processed foods, I always think of… my dad.

EH: Do you think Oprah will get an Academy Award nomination for The Butler?

SD: I haven’t actually seen it, but I hope she does. She’s a positive force; a courageous visionary. I would never have had the guts to say ‘Oh, the world needs another TV network.’ And yet, there she does. And bit by bit, we see her really making it work.

EH: You get lauded with a lot of praise, is there anyone’s acclaim of you and your work that probably trumps the rest?

SD: Years ago, it was probably in the late 80’s, I met David Bowie at a party. I told him I’d always been blown away by his creativity and he said, ‘Well, I’ve always loved your creativity. I love your Tammy Faye Baker window that you did.’ I nearly shit my pants with joy. He is an enigma and one of the most creative people ever to impact our culture.

EH: In the book, you detail exploits of your time in the fashion world. Any stories you had to remove or water down out of fear of throwing someone under the bus?

SD: No. My book is a love letter to the fashion industry. I don’t have any real gripes with people. The fashion industry is a lot sweeter and a lot nicer than outsiders might think it is. Fashion people really look out for each other. If you compared it with the world of finance or the music industry or any other major industry, fashion people are actually pretty vanilla. It sounds smarmy, but I don’t have any feuds with anyone or know anyone that does. There’s no bitchy revelation. The only edgy things I say, I say about myself.