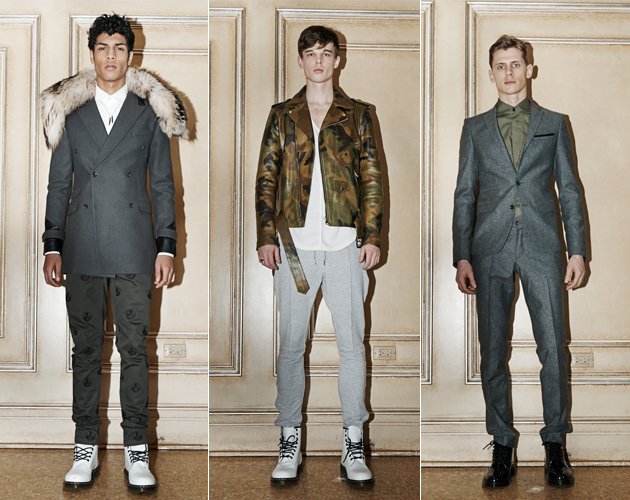 If you didn’t hear about Pyer Moss after Rihanna was photographed walking out of a night club a few weeks ago with their camo leather jacket draped over her shoulders, then now’s the time to pay attention. With a small but tight 10 piece capsule collection, the new men’s line was unveiled during New York Fashion Week and will launch officially for Fall 2013. From what we can see, Pyer Moss looks to be all about edgy elegance. The run of the mill might easily bore the Pyer Moss man but he’ll also become excited just as rapidly by finding that perfectly special every day piece. For him, there’s a cashmere overcoat with a larger than life Siberian raccoon fur collar but also a chill wear-with-anything cashmere cardigan. Then you’ll find a charcoal two button suit with a sliver of pocket detail that could easily be rocked on a sundry of occasions. The Pyer Moss guy might frequently be in the mood to make a statement but also understands the joy of rolling out of bed. For him, there’s the leather jacket, which in addition to the camo, comes in oxblood and black. The thread here is the attention to detail and the commitment to keeping it smart, all contravened with a love of bending the rules. We’re excited to see more.