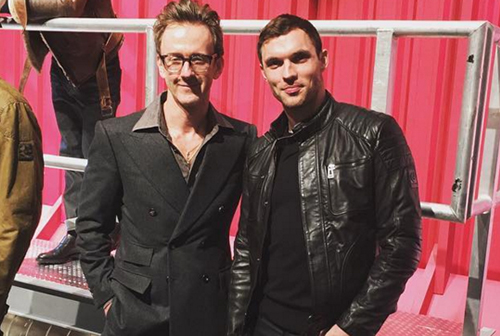 Though the designer/director missed out on gold, Tom Ford‘s supporting man, Aaron Taylor-Johnson, took home Best Performance by a Supporting Actor in a Motion Picture — Drama for Nocturnal Animals at this year’s Golden Globe awards. Decked out in a look by the designer himself, the film marks the second project by Ford to hit the big screen and his first time being recognized by the Hollywood Foreign Press Association for his work.

Model Christian Williams captured the riotous energy that Sibling London brought to the London Fashion Week Men’s runway, the brand debuting a knitwear (what else?) line of deep navy and burning maroon. The collection itself is a fervent attempt to reclaim the union jack and reinvent a coveted English punk vibe through loud and unexpected detailing.

Unconcerned with his film Deadpool’s Golden Globes engagement in America, actor Ed Skrein returned to his homeland for London Collections Men’s and Belstaff‘s impressive Autumn/Winter 2017 showing. The brand, inspired by the British Navy for a dual offering of both men’s and women’s lines, debuted a ’60s-inspired collection with minor embellishments for a classic feel in execution and scope.

Dior Creative Director Kris Van Assche saturated his Instagram feed with the French brand’s high-brow Summer 2017 campaign prints. Starring the likes of Rami Malek, Boy George, and A$AP Rocky, a recent favorite of the designer, the images were shot by photographer Willy Vanderperre and usher in a darker, austere vibe for the fashion house.

Disney’s Beauty and the Beast