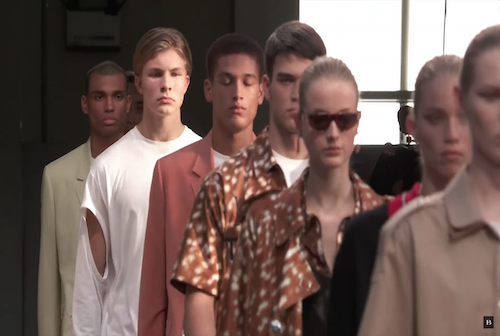 After being announced as the label’s new creative officer back in March, Ricardo Tisci finally debuted his vision for Burberry Spring/Summer 19 in London. The resulting collection was a compilation of the designer’s heritage mixed with current trends and tied together by Tisci’s distinct ability to merge the dark with the romantic.

The classic Burberry trench was featured prominently for men and women, with Tisci adding new details (like an extra button strap) to the piece. Men’s suits were kept slim, with different striped prints coexisting peacefully. Other suits were paired with contradicting striped shirts, and one standout was styled with a black sweater over it to create the illusion of a dip-dye. Streetwear influences were also present in the collection, with logomania landing on several looks — the designer opted for a simple graphic print that read ‘BURBERRY’ in a Virgil Abloh-like fashion. Classic Tisci-isms like animal prints and Gothic imagery were seen throughout the presentation, indicating the designer’s perspective, which blessed Givenchy before, will continue to inform his work while retaining the label’s legacy. Take a look at some highlights below.