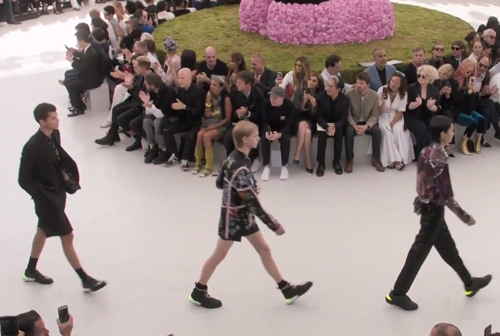 This past weekend saw Kim Jones’ debut collection for Dior since being announced as the creative director of menswear earlier this spring, succeeding Kris Van Assche’s 11-year stint at the label. The Spring/Summer ’19 collection was a fresh introduction to what Jones brings to the table, balancing a street savvy (Jones was behind the massive Louis Vuitton x Supreme collab last year which dominated the streets and social feeds for a while) with a respect to traditional tailoring sensibilities.

A series of double-breasted suits were sprinkled throughout the collection, in a slightly looser and softer fit, contrasting the sharp structured tailoring the label has become known for. Romantic floral prints were given new dimension by being paired with vinyl jackets. Workwear-inspired pieces blended in with more formal attire. Sneakers were paired with suits. These frequent dichotomies — hard and soft, high and low, classic and modern — were a powerful indication that Jones has the range to carry the label forward while never straying far from its roots.