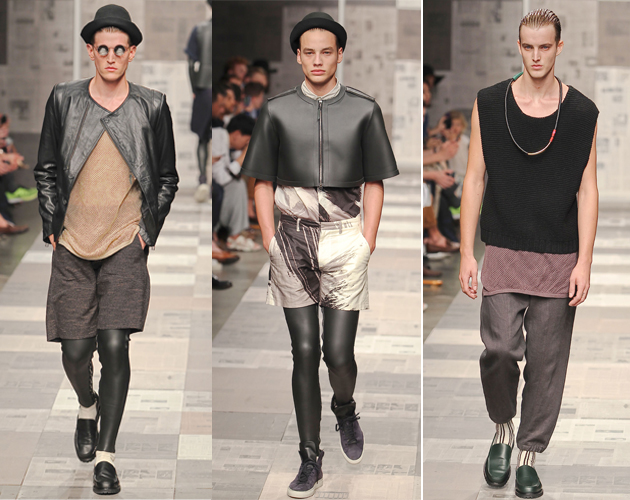 Robert Geller Spring 2013: Dark Side of the Moon

Beach looks, usually bright and bubbly, are filtered through the intellectural Robert Geller lens for his Spring 2013 collection. Taking inspiration from photographer Sarah Moon’s sea side images recently shown at the Centre de la Photographie in Paris, the collection wastes no time in making the case for cloudy coastal coolness. Although a lot of her work was in color, Moon believed that the essence of photography was in black and white.  Geller, inspired by Moon’s sepia prints, concentrates on a matte sepia colored palette in variations of blacks, and whites. Off black brush stroke print shirts are paired with Japanese linen print pants, and neoprene capes—a fabric that gets used in a few different layering technicques. Black bomber coats, sleeveless rider vests, and leather moto blazers, sit atop classic machine knit tanks, color combo sweatshirts, and wide leg shorts. All the while faded shades of khaki, brown, navy, and emerald are added, suggesting a similar fragility of memory like the blurring of colors that Moon once used to create the effect of resembling a painting rather than a photograph. Sinister, romantic, littoral—the tone of the collection beautifully addresses a unique beach side feeling with stunning pieces that will still translate to chilling in the stark city as well.

Robert Geller Spring 2013: Dark Side of the Moon