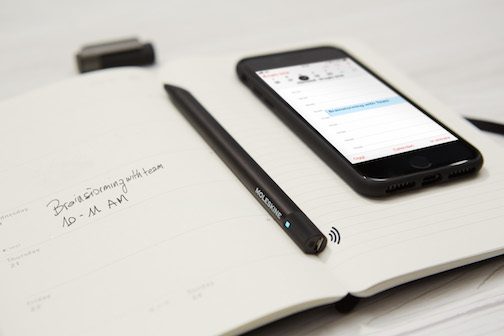 Garnering sleek style, quality and innovation, Moleskine proves, once again, to be the leading product designer with an upgrade to their smart writing system. Hooking up paper and digital, Moleskine makes it possible to bridge written content directly to a portable device using their Pen+ Ellipse. Your written text is then available in document form. The pen can also directly access your calendar, voice-notes, and text messages. Pen+ Ellipse is virtually a revamp of every system out there into a very commonplace, everyday object device.

“The main criteria for us in many way, is that it’s a pen. It’s not a device. It’s not a keyboard. It’s a pen and it’s a notebook,” says Peter Jensen, director of digital innovation at Moleskine.

The launch of this “pen” is something directly from futuristic, FBI-inspired films. The pen has a camera that monitors everything you write to transfer it directly to the Moleskine Notes app. You can charge the pen using a USB cord and even password protect it. Everything you ever write down can now be stored digitally without much extra effort. By substituting your regular pen for a Pen+ Ellipse, you won’t ever lose any information.

Moleskine’s efforts to bridge the real and the digital world stem from the belief in the necessity to move our muscles in order to be creative. The brand invited artists, working professionals and even a neuroscientist for a talk at MILK Gallery to link the importance of physical touch to the process of creating. One of our primary human skills and instincts involves touch— including holding a pen and feeling the texture of paper. Moleskine already puts emphasis on its quality paper production because the product directly influences outcome.

Pen+ Ellipse is anticipated to take the connection between our physical creativity and digital existence further in order to seamlessly encourage more productivity. Creation in physical form is no longer exclusive and often needs to be linked digitally. Vice-versa, sole digital existence does not guarantee creative success. The Pen+ Ellipse is the ideal tool to make possible existence of ideas endless on digital platforms and in physical freehand form.

Pen+ Ellipse is a necessity for a modern individual seeking to save time and improve productivity while feeding creativity. It is the ultimate gift for oneself or another.

Pen+ Ellipse is available at Moleskine. 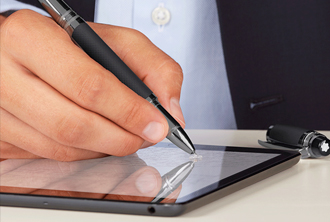