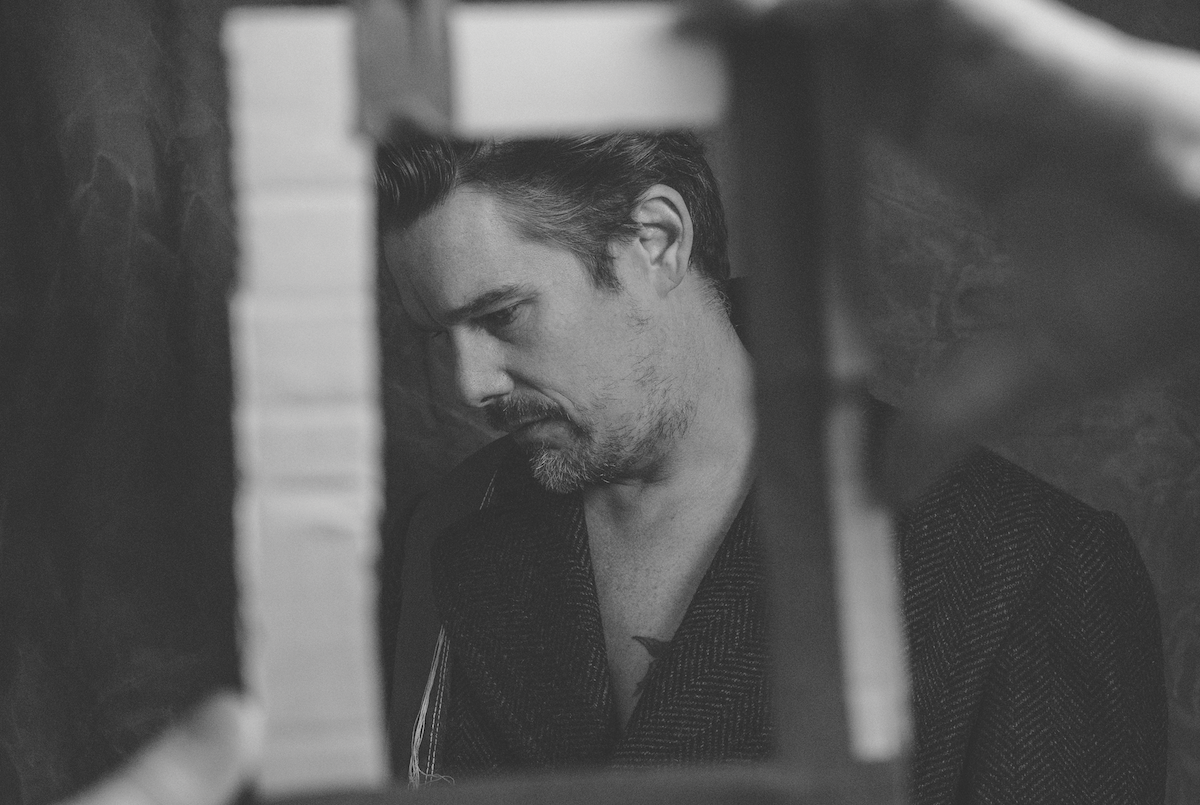 Photographed by Thomas Goldblum and styled by Darryl Rodrigues.

It’s hard to pinpoint when exactly Ethan Hawke became a household name, having seemingly been both an unshakeable presence in Hollywood’s elite for over three decades while also remaining one of it’s most famous outcasts. But he’s not interested in being a movie star – Ethan Hawke is an artist, a concept that, to him and those he admires, is removed from the yearning for stardom.

This is perhaps truest in Blaze, Hawke’s latest effort which he wrote and directed, that chronicles the life of outlaw country musician Blaze Foley. Largely unknown except to true country music connoisseurs, Foley was a true rebel and artist, whose life was as intensely marked by his love and respect for music as it was by his struggle with excess. But Foley wasn’t a rockstar—not to be pitted inside the same legacy of other artists who passed too soon by living under the detrimental credo of “Live fast, die young.”

No, Foley was not a star, nor was he ever interested in being one. Which makes his appeal to Hawke (a fellow Texan) obvious. 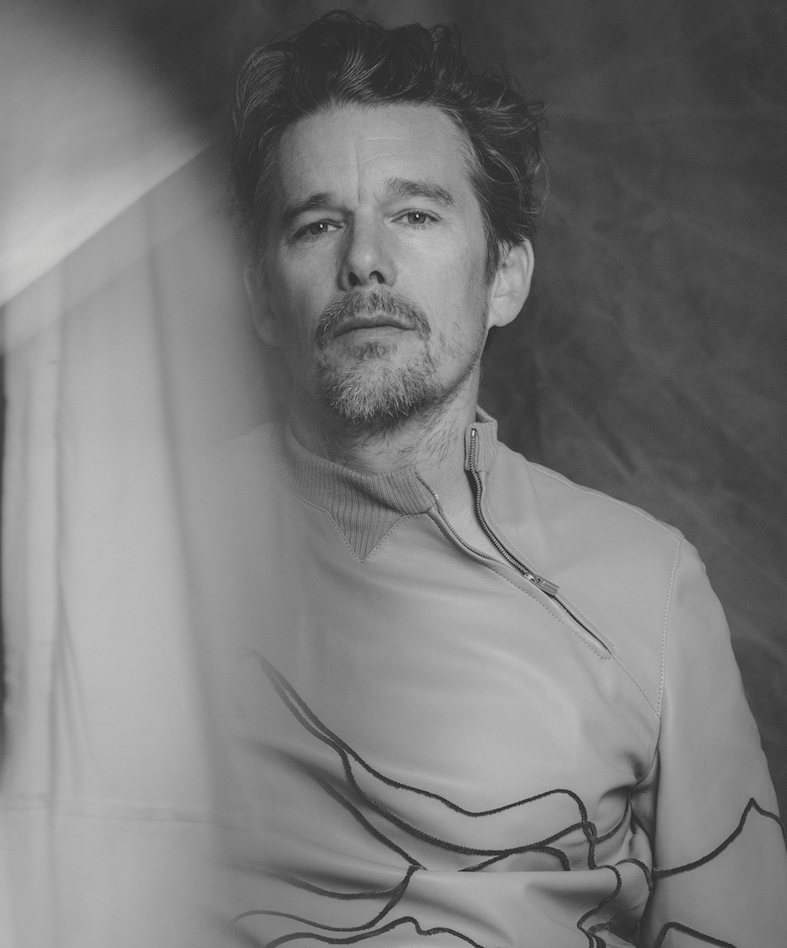 It’s not the first time the multi-disciplinarian has gravitated towards the rebel as his subject. There’s Seymour Bernstein, Troy Dyer, Reverend Toller, Hamlet. It’s clear that Hawke has always held an attraction to the outcast.

“There’s this quote my mother used to have on the wall when I was growing up, ‘There’s only two things in life worth hating: an easy life and vainglory.’ As a kid, I used to stare at it and wonder what the hell it meant,” he laughs, “and I think there is a certain aspect to society that is always celebrating the superficial… and we all kind of play the game, and we try not to, and then we succumb. But there’s a part of us that knows we’re on a rock spinning in space, and that we have no idea why we’re born and why we’re dying, but we just work so hard to forget it all the time. There’s something about people who don’t buy into the knee-jerk artifices of our lives that appeal to me. They just always have.”

Hawke speaks in a particularly warm manner that combines the spirit of an old soul and a curious child. He is excited yet introspective, combining idioms like “soup to nuts” with incredibly wise views on life, art, and love and how collaborating is the ultimate culmination of these. When I ask him about how he first heard about Foley, he starts on the surface before diving deep into the matter. “Listening to country music was always the way to kind of be close to my father and have it be something we could talk about, so I just loved on it hard my whole life.”

Foley’s music came to Hawke by way of his friend Ben Dickey, a musician who he had met through his wife (Ryan Hawke) and her best friend Beth Blofson. Blofson, as it would happen, was in love with Dickey around the same time Ethan and Ryan fell in love, and the four became deeply entwined in each other’s lives. “It sounds so corny to say, but it’s really strange how the universe works.” The universe, it turns out, would slowly roll out the idea of Blaze in a fortuitous manner.

“Over the years we started talking about Blaze a lot and slowly this idea of Ben playing Blaze in a movie erupted in my mind.” Hawke begins to speed up as he talks, excited to share this particular story of the universe’s delightful mechanisms. “You know, Ben is from Arkansas and Blaze is from Arkansas. Blaze is 6’5 and Ben is 6’5, and they’re both big boys with big red beards, and it started to seem like a match made in cinema heaven.” From then on the project started taking shape. Ryan became the producer, Beth became the art director, Ben became Blaze, Alia Shawkat became Sybil Rosen, and as if to wrap an already nice gift in a prettier package, the real Sybil Rosen became Hawke’s writing partner.

Writing with Rosen was a great opportunity, not just because she was the person who knew Foley best, but because of her own particular artistry. “She really understands the difference between telling a story and the facts,” says Hawke, a successful feat that not many biopics get right.

So how do you tell a story about a life and music? You turn it into a song. This is how Blaze is told, not chronologically, but rhythmically, with Hawke creating a circular pattern inspired by verses and choruses and bridges. But it’s not just a story about music, and it’s not just about Foley either. It’s a story about art and love, and as its circular narrative takes the shape of the type of songs that immortalized Foley, it also reflects the shape of Hawke’s real life. 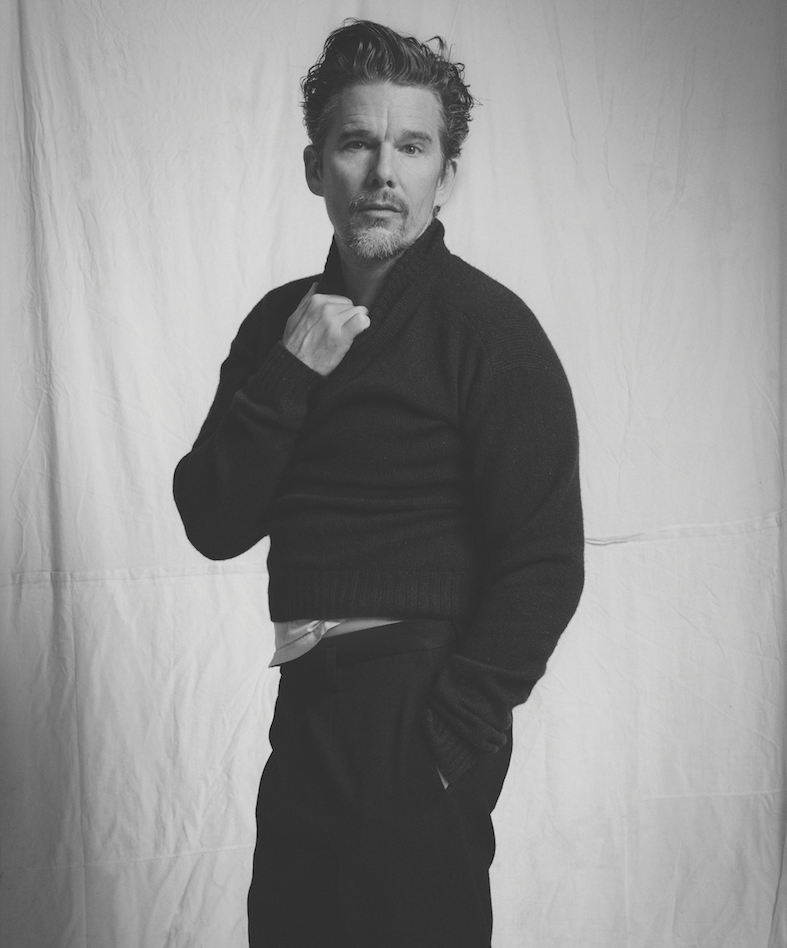 It is nearly impossible to talk about Hawke and not talk about Richard Linklater. They are, after all, a duo responsible for some of the most lovely experiments in the history of film, finding themselves reunited in Blaze, where Linklater plays a brief but important role. “He and I met and we just got along like gas and fire. I mean, we just couldn’t stop talking,” Hawke recalls. That first conversation turned into a collaborative butterfly effect, spawning the likes of Boyhood and the Before trilogy. “Our conversation has been going on about time and cinema’s relationship to time.”

Hawke has clear gratitude for Linklater. “People ask me why I work with him all the time. The truth is when you’re around somebody who really believes in you, you start to accidentally believe in yourself because you want to be the person they see you as. I remember even as a young man Linklater thought I was a great actor. He would get so excited by my acting and it made me value it, you know because I valued him. It makes you a little bit better, the fact that somebody you respect believes in you. And Linklater was that for me and I try to be that for Ben and on and on it goes, I guess.”

There’s a preciousness by which he recalls certain moments in his life, and one can’t help but catch the excitement that punctuates singular words in Hawke’s stories or the way his laugh booms like short but heavy thunder. Boyhood, with its 12-year filming span, is one of these moments. “I remember my eyes filled with tears. I didn’t want it to be over,” he recalls. Blaze is another one of these moments, the similarity of his attachment and the clear way he and everyone else involved handed over a piece of his heart and soul to its creation. Making these films “had been so vital and so valuable that [they] didn’t need to be a movie,” the experience alone had been sufficiently rewarding. 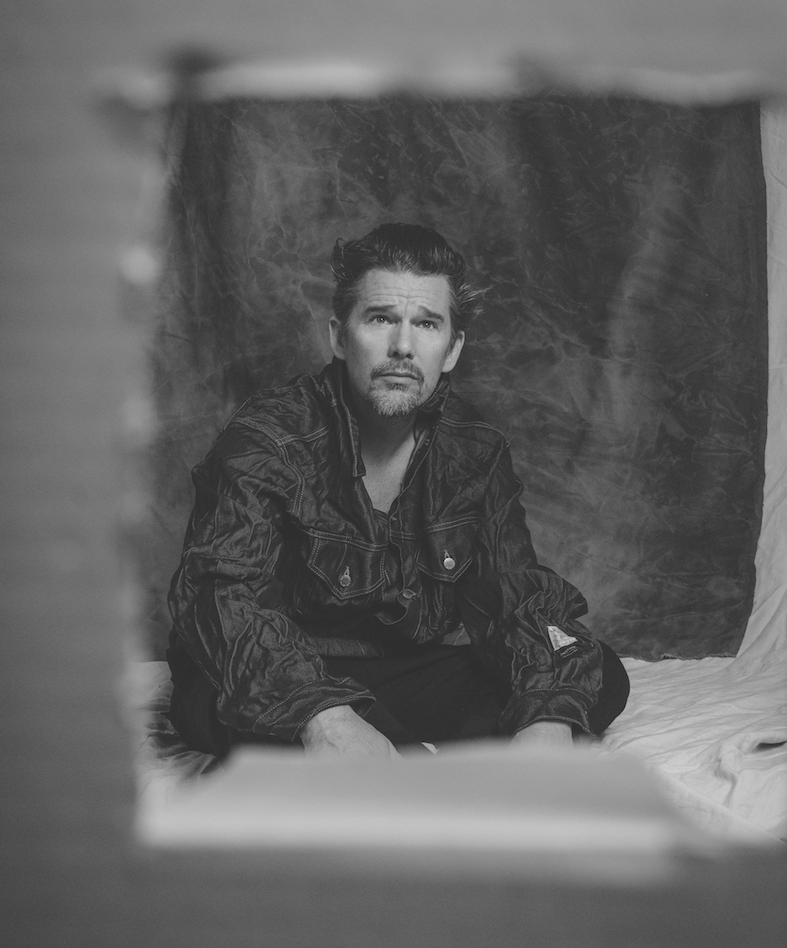 Hawke is proud and excited about his work, but when talking about what art and true beauty are, his humility overpowers anything else.

I ask what the most beautiful thing he’s ever seen is, and without skipping a beat he replies. “My children being born.” He goes on, “I know it’s corny, but I’ve been thinking a lot about it recently. My oldest just turned 20, and I have four kids, and it’s hard to imagine that everybody walking the streets was actually born, because when it happens… and this thing starts to breathe on its own, it’s divine. It’s the only thing I’ve really witnessed that, when it happens, you just bow before the universe. You don’t need to give it a name. It’s just absolutely awe-inspiring.”

Hawke’s perceptions of beauty and nature are correlated to what he believes to be the meaning of art. “It’s nature manifest in us. It’s trying to turn the daily brutal minutiae of life that wear us all down slowly like sandpaper into something revelatory and mystical. It’s trying to make sense of how to remind us of gratitude and the magic of life. It’s whatever makes our hearts beat and babies be born. When it’s right, it’s effortless.”

There’s a particularly tender moment in Blaze when Foley and Rosen embrace on the flatbed of a truck as it winds down a scenic road of the Texas woodlands. Before excess happened and the pursuit of some type of success pulled them apart. Before anything was more important than the complex simplicity of their union. She asks him if he’s going to become a big country star. “I don’t wanna be a star,” he replies. “I want to be a legend. Stars burn out because they shine for themselves. Legends last forever.”

“Would you rather be a legend or a star?” I ask. Hawke laughs his loudest and sharpest one yet and pauses to choose his words carefully. “What I think [Foley] was getting at is, if you’re more in service of the art then your life will be full of meaning and joy, and if you want the art to be in service of you and self-promotion, then you’re making your work and your life smaller, and you’re destined to be miserable, no matter how much success or failure you have. So I think on that definition, if ‘legend’ means being in service of the art form itself, then that’s the category I’d want to go in.”

No, Ethan Hawke is not a star, nor is he interested in being one. 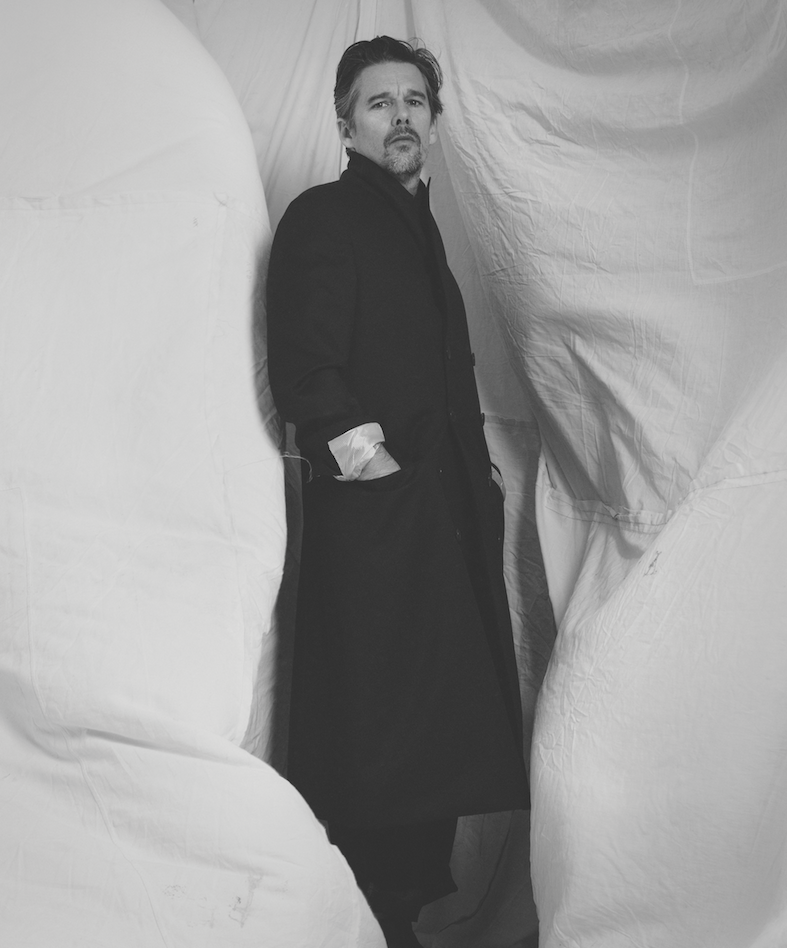 Ethan Hawke and Joe Alwyn Star in the Winter ’18 Issue 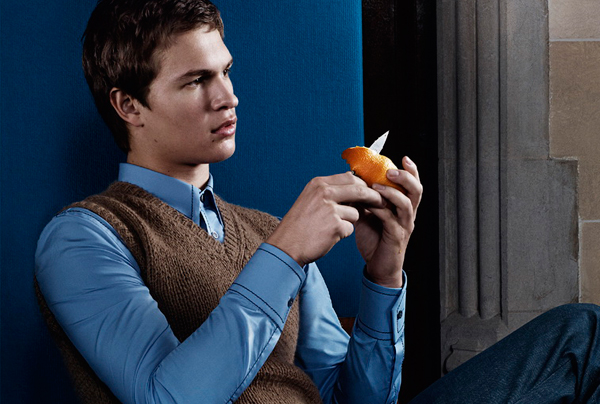 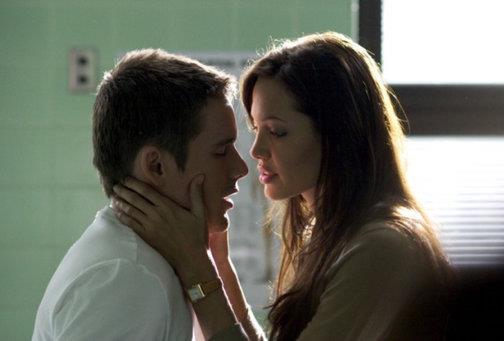