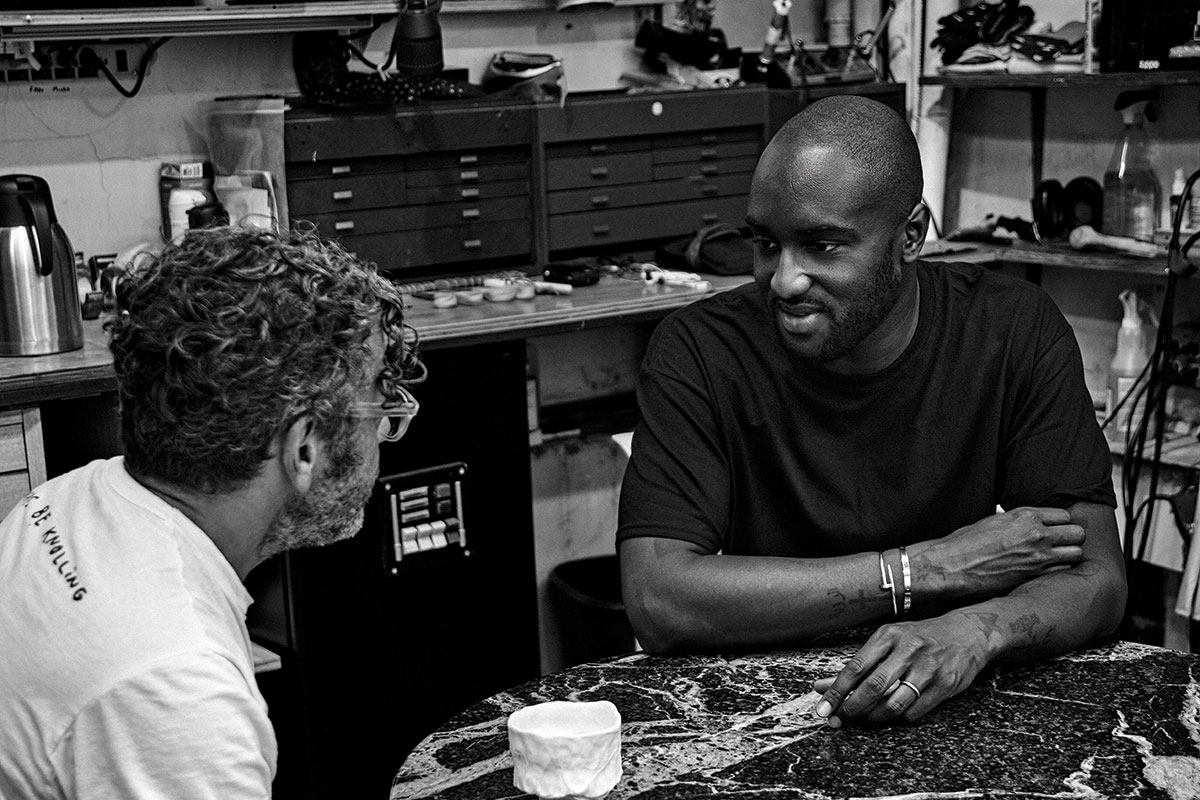 VIRGIL ABLOH: I had this thought yesterday: Your personality is different if you put it in proximity to another personality. You use different words; you become this new hybrid of [both].
TOM SACHS: To me, feedback is everything. In a conversation like we have now, you’re saying something, I’m listening, I’m acknowledging, and I’m responding. You’re nodding. Your eyes are indicating that you hear what I’m saying. That’s essential. I once worked with someone who was really smart, but he was really bad at giving those signals. Right now, you’re not even thinking about your eyebrows rising, you’re nodding gently.
ABLOH: Posture …
SACHS: All that’s indicating that you understand what I’m saying, and he would never give that feedback. Meanwhile, he was under- standing, so that’s one form of …
ABLOH: Banter.
SACHS: Yeah. I feel like that relationship could never go anywhere because there weren’t any signals of empathy.
ABLOH: One thing that I was bouncing around for talking points was the idea of studio culture. In [the short film] “10 Bullets,” your premise is sort of magnetizing to the point where I can feel you even when you’re not here [at your studio]. Downstairs, it radiates off of the three people that are off in their own worlds sanding and cutting blocks.
SACHS: How many people are on your team?
ABLOH: I have eight.
SACHS: And you’re not in the studio, you’re here right now. They’re there, and you’re not managing them, but they’re still getting paid, they’re still working. Maybe not as efficiently without you—or maybe more efficiently—I don’t know. In “10 Bullets,” we all have the ethics of the studio, which are the foundation and design principles. “If I’m not here, make it look like this.” A good designer will know how to channel what you want. That’s what the culture of the studio is. I always go back to feedback, because it’s the response, and feed- back even includes the audience: people that use your products or view your products, listen to them, whatever your art is. 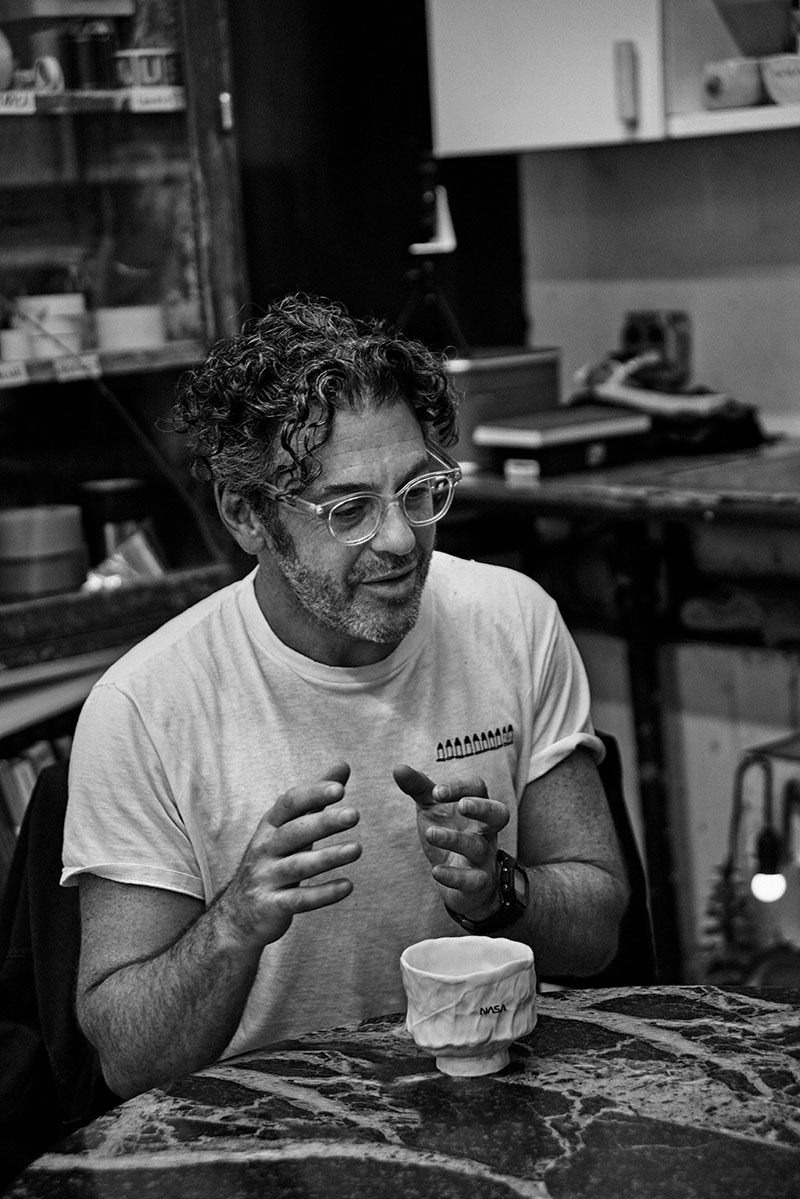 ABLOH: The critic versus the user is feedback in a modern context, because now we have the social media thing. I started my brand with my thumb, you know? This device, it was like, the Wild West, because I created it [through] juxtaposition. I love the reality of a situation. It’s something I’ve learned from when I started being in the creative sphere. Fashion was just an open lane that I saw no one standing in for this particular version that played with sight. A jacket is a jacket is a jacket, jeans are jeans, but what if I spray-paint them with industrial lines as an international language that signifies something? I was just a kid on Photoshop, like “Hey, I’m going to take this street thing and I’m going to bring it to this other world.” When I put graphics on clothes, people all of a sudden thought that they weren’t cut, that I didn’t pay attention to the fabric.
SACHS: Or that it’s like truncated?
ABLOH: Yeah. It’s like Canal Street versus Prada, you know? What are the nuances of the differences? I like stereotypes, but I create as a point to trick people. I use it, and I identify with the why, but now I’ve graduated to make it more sophisticated. If I name drop like [Ludwig] Mies van der Rohe’s “Farnsworth House” as being an inspiration for those diagonals, that’s what really is deep inside me, but I enjoy using each creation to either confirm or juxtapose what the original premise is—I created it all off feedback. 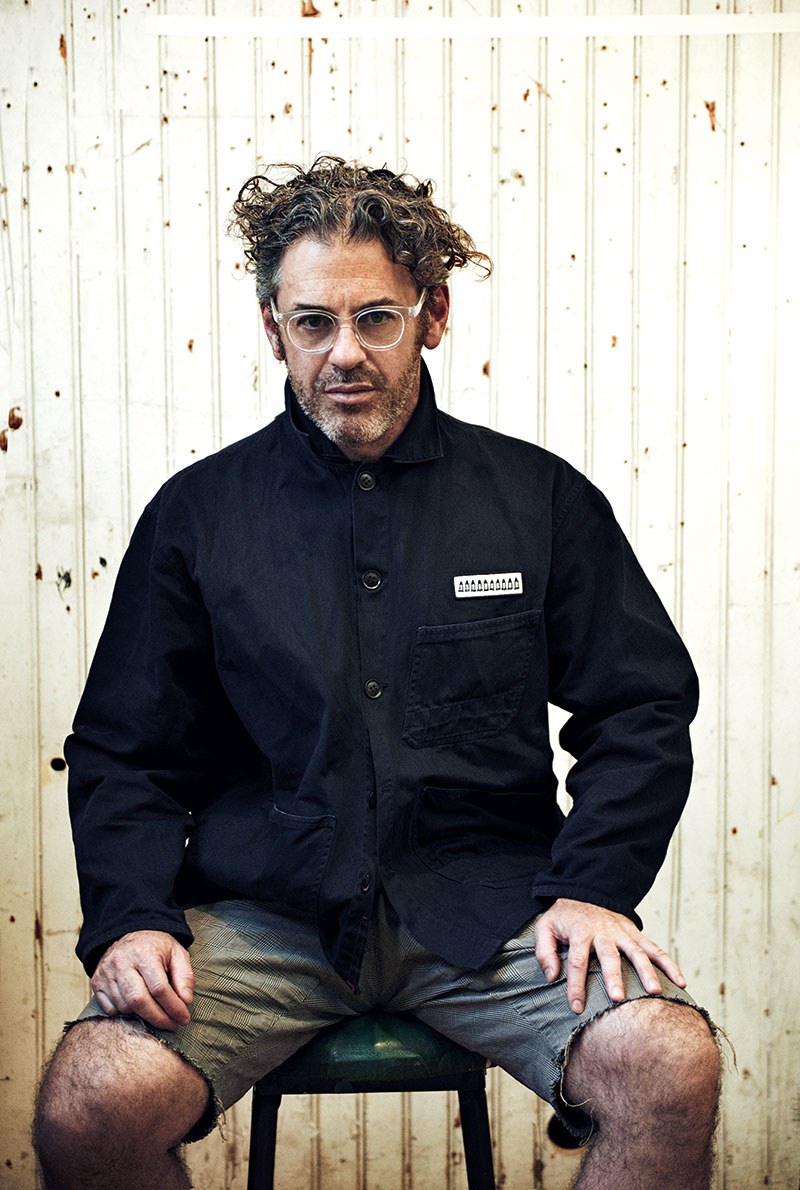 SACHS: Well, this brings up a good question. What is “cool?”
ABLOH: The depth. Do you think it’s cool like on the periodic table? Is it an actual electron? Or do we say that it’s not?
SACHS: I love that response. It’s not, because it’s so many things and there’s no one way. People say cool is like a pejorative, because it’s literally cold, the opposite of warm. It’s icy and it’s all about rejection and desire. Someone’s cool because they’re not warm; they’re not your friend. They’re cool and unattainable. Then you think about the icons of cool, like James Dean. I think when people look to you for your art, for your clothes, for whatever you represent as fashion designer, 6-foot-4 black man, they are looking to you as someone who is independent, self-sustaining, and doesn’t need anyone. Like, “Fuck you, I don’t care if you like my clothes or not.”
ABLOH: Yeah, I have a direct relation that’s coming either way. 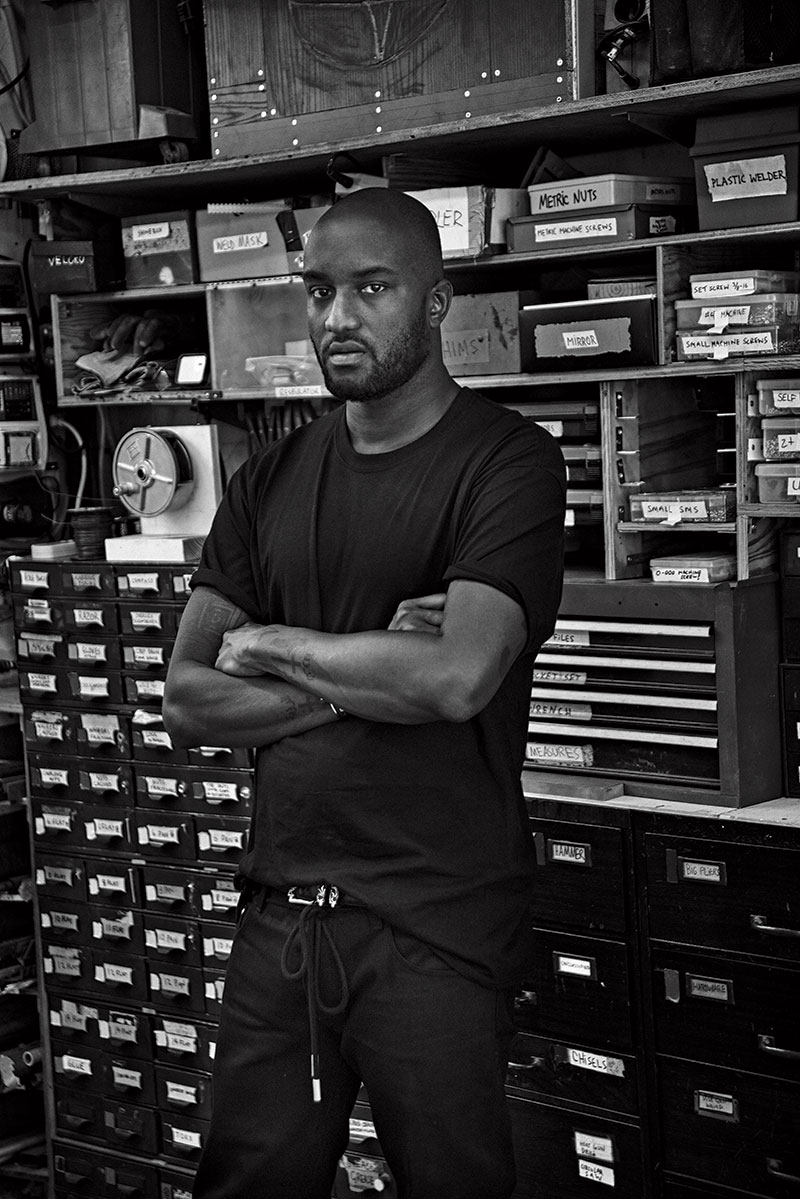 SACHS: But all that stems from confidence and ultimate quality.
There’s that, too. That’s why it’s not on the peri- odic table. It’s like an emotion. There’s a bit of luck, too. SACHS: You mean a certain number of electrons, a certain formula?
ABLOH: If I add this plus this plus this and a dash of that, it’s not so ephemeral.
SACHS: It could be like the periodic table in the alchemical sense. You take lead and you add a certain amount of antimony, zinc, and, like, some spells: You get gold.
ABLOH: We’re [both] self-taught. Coming from a random high school, I wasn’t near Paris or New York, but I knew that there was a safe haven in the fashion world because there was this thing that I could make. I did a shitload of work: five years of engineering and three years for a master’s in architecture at the Illinois Institute of Technology, but half my time was also spent on hip-hop, skateboarding, and all the things that make the ’90s the ’90s. I ran to the fashion world, because there’s space there, but now that I’ve gotten here, I respect the art world as like the last space. I always used to joke that it has the tallest walls to protect its ideas, because at the end of the day I rate the art world as like this sort of nuclear reactor for things that you can put in an iPhone, things that you can put in a T-shirt, things that you can put in a water program in Africa. 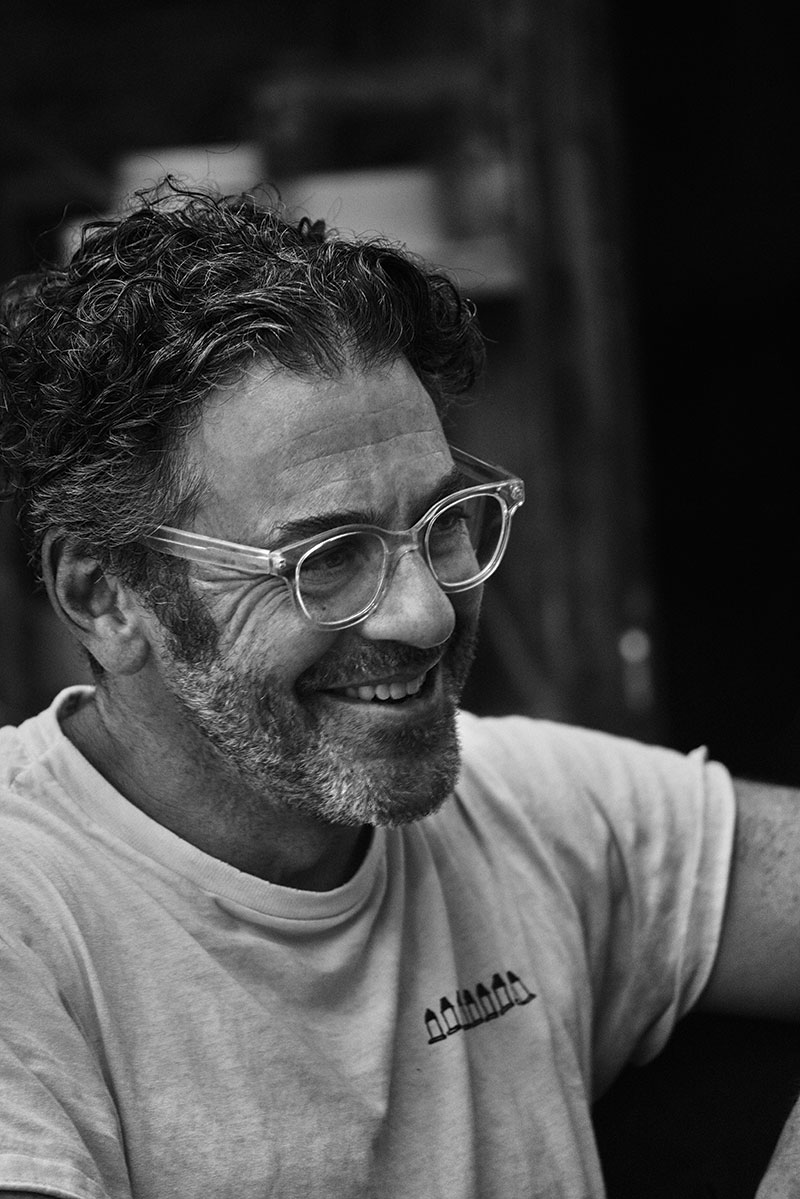 SACHS: I would say it’s more like Minecraft, but not the one where you build really high walls, more like the really violent one, where you have to survive. What’s that one called? Is that also called Minecraft?
ABLOH: Oh, I know what it looks like. It’s very explosive.
SACHS: And in that, you don’t go in to knock down those walls, you go into build your own city, and you build it fast and good and cheap, which is like the engineer’s triangle. You can’t do all three.
ABLOH: That’s the Holy Grail.
SACHS: That’s what art does. But I think the important thing is not about the external art world, fashion world, or architecture world: It’s about creating the Tom world, the Virgil world. Since 1945, every artist has been its own art movement.
ABLOH: Wow, say that again.
SACHS: This is not my idea. This is big … The first movement that came after WWII was abstract expressionism and then sort of pop, conceptual art—kind of the big ones. But even within something like abstract expressionism, you have artists as different as Jackson Pollock and Mark Rothko. They don’t look anything like each other, but they’re lumped into the same movement. They’re really their own. And out of Pollock, you’ve got other artists, line figuration craziness. Out of Rothko, you’ve got color field painting. And when pop art happened, Andy Warhol was so different than [Roy] Lichtenstein and all the other ones, and I think that…
ABLOH: They’re worlds.
SACHS: They’re worlds. We’re friends, and there are things we’ve shared interests in, and we overlap, but ultimately we’re our own islands. People gain strength from each other. Like in Minecraft, you can team up with other people, together you can build a fortress. You can build a movement, you can build associations, and friendships that support each other.